Wage Parity for PAs Remains a Goal in 2019

AAPA monitors the gender pay gap in the PA profession through the annual AAPA Salary Survey. In 2019, we dove deeper into our compensation data than we have before, in response to analyses we’ve conducted on the characteristics of the profession during the past several years.

In our analysis, we included PAs who receive an hourly wage and PAs who are compensated based on productivity in addition to salaried PAs. In order to do this, we created a datapoint for every PA who responded to our 2019 AAPA Salary Survey called “total compensation.” Depending on a PA’s compensation type, this variable was one of the following: base salary, annualized wage (hourly wage multiplied by number of weeks worked in 2018, multiplied by hours worked weekly), or productivity pay. Then, we added any bonus that was received to this number.

The 2018 median total compensation of full-time female PAs was $13,380 less than that of males. Full-time female PAs were also less likely than male PAs to receive a bonus (48.0% of women vs. 53.4% of men for full-time PAs). These disparities are present for all levels of experience (Figure 1) and in every specialty (Figure 2). There is no experience level or major specialty area in which women have a higher median total compensation than men in the PA profession.

In any discussion of gender-based compensation differences, there are skeptics. For example, people may say, “but female PAs work fewer hours per week than male PAs!” While this is not universally true for every woman in every profession, there is in fact a difference in the PA profession. There are other differences between male and female PA compensation as well.  Since there were many more males than females early on in the 52-year-old profession, there are now more seasoned PAs who are men, who, on average, have more years of experience than women. As mentioned above and in Figure 1, compensation increases with experience, but if males on average have more experience, there may be differences in salary unrelated to gender. As an organization, AAPA recognizes that looking at gender alone does not allow us to take into account a multitude of factors that may affect an individual’s salary.

Statistical modeling, however, shows that female PAs were compensated less than male PAs even after accounting for a variety of factors that might be expected to affect compensation, including years of experience, hours worked in a week, patients seen per week, number of weeks worked in the year, primary specialty, work setting, whether a bonus was received, whether a PA took call, whether a PA was in a leadership role or owned part of their practice, statewide cost of living, education, and race.

Using the sample of nearly 8,400 PAs who provided data for each of these questions the mean total compensation of female PAs was only 85% that of males in the PA profession. However, a difference remains even after controlling for compensation-relevant factors. Overall, mean total compensation of female PAs was 7.4% less than male PAs, even after accounting for other factors that could be expected to affect compensation. In the PA profession, female PAs were still only being paid $.926 for every dollar male PAs were paid even after accounting for other differences, and this gap widens with each year of experience a PA has.

It is important to consider this and other factors, such as compensation negotiation, as AAPA continues to monitor this. In fact, student responses to a subset of questions within the 2019 AAPA Salary Survey reveals differences in anticipated starting salary between male and female students – with female students anticipating less, highlighting the importance of pay and contract negotiation resources for graduating PA students.

The total compensation discrepancy begins almost immediately upon entering the profession — there is a disparity between male and female PAs in the first years of practicing as PAs. This difference may be exacerbated as PAs progress through their careers, since increases in pay are often based on increasing the previous salary by a certain amount, and new employers often base a PA’s starting pay in part on their previous salary. A compensation disparity that begins on a PA’s first day on the job could have lifelong implications for the PA.

The gender pay gap is an issue that the PA profession and many other professions are facing. AAPA will continue to work for fair and competitive compensation in the PA profession until PAs reach wage parity. For more information, visit https://www.aapa.org/career-central/wage-parity/

Figure 1. Median Total Compensation (Base + Bonus) of Full-time PAs From Primary Employer by Gender and Experience 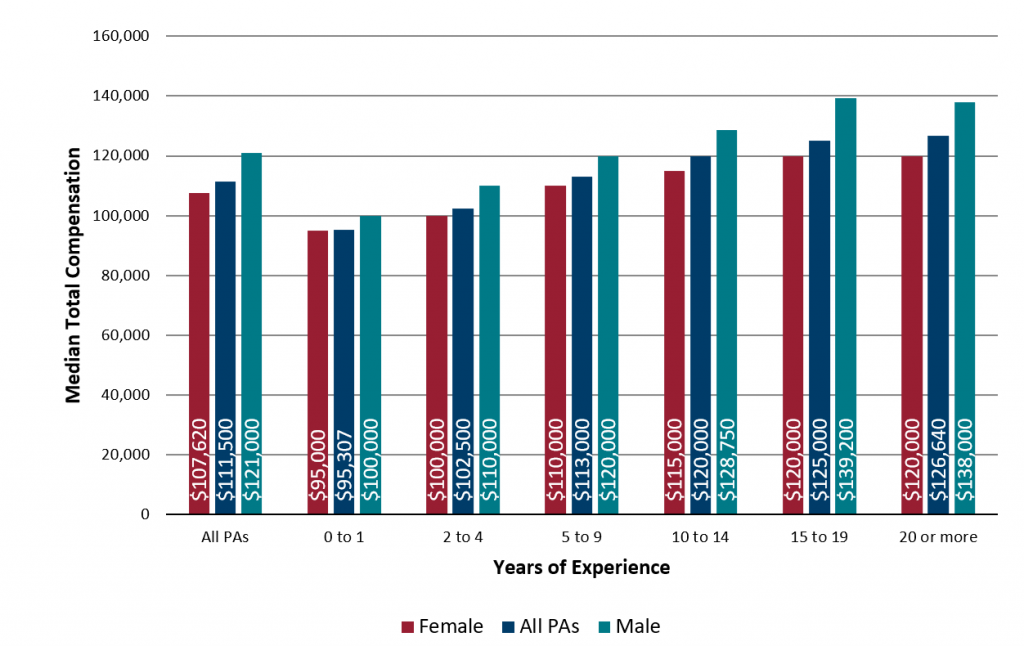 Note: The graphs above display median total compensation for full-time PAs. In a separate analysis of full-time and part-time PAs based on more than a dozen compensation-relevant factors, a pay gap remained between men and women even after controlling for those factors, translating to a total compensation difference of 7.4%. See the list of factors controlled for in a separate analysis on the previous page. This article was updated from previously reporting a 9% pay gap – that regression model did not include the gender x years of experience interaction. The pay gap among new PAs is 7.4% and widens over time.

Tim McCall, Ph.D., is the research manager at AAPA. Contact him at [email protected].

Author’s note: The regression analysis described in this article that controls for compensation-relevant factors when predicting pay is described in detail in a manuscript being submitted for peer-review. For more details and information regarding the data, contact the author.