The Service Committee will be responsible for assisting with PA Student Service Week and researching service project opportunities in Denver for the 2020 Conference. 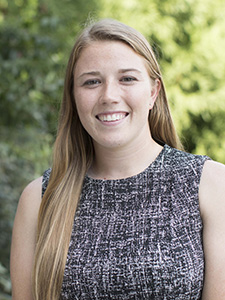 Check back soon for Betsy’s bio!

As an undergraduate, Trew volunteered as a teaching assistant in music theory and music history, as well as serving as vice president of her college chapter of Sigma Alpha Iota, a philanthropic music fraternity serving the local community. As a graduate student, she worked as a pre-doctoral teaching associate, teaching a freshman-level multidisciplinary writing course focusing on research writing. During her time at the University of Washington, she developed a passion for interdisciplinary research.

Since graduation, Trew has performed regularly in musicals benefiting such groups as the It Gets Better Project, Peace for the Streets by Kids from the Streets, and the Gay City Health Project. She also volunteered as a kitchen aide for the Chicken Soup Brigade, part of Seattle’s Lifelong AIDS Alliance. These interactions with the Seattle LGBTQ community, combined with employment as a medical assistant at the University of Washington Medical Center, inspired Trew to promote awareness of LGBTQ issues in her clinic. This eventually led to collaboration with the clinic medical director to create Washington state’s first Medicaid Center of Excellence for transgender orchiectomy.

Trew’s program has a focus on the underserved, and she looks forward to aiding the urban underserved in Seattle after graduation. In April 2019, Trew was awarded the MEDEX Northwest Richard A. Smith Scholarship for her leadership potential and goals to innovate care for LGBTQ and other urban underserved populations.

As Western Regional Director, Trew aims to serve as a resource for members in her region, improving communication channels and offering guidance where needed.

Currently a second-year student at Methodist University in Fayetteville, North Carolina; has served the past year as a class officer and Student Academy Representative. Prior to working in the medical field Shaheen worked in recreation therapy/outdoor education for 11 years where he served as an ambassador for Outdoor Nation, on the board of non-profits including North Carolina Children and Nature Network, and as the 2011 Richard Trudeau scholarship winner for leadership in park and recreation. In 2016, he transitioned full-time into the medical field as a certified nursing assistant at Levine Children’s Hospital on an orthopaedic medical-surgical floor. Other medical experience includes wilderness rescue, sports medicine, and athletic training. Currently Shaheen is interested in working in a surgical specialty (orthopaedics or trauma) or emergency medicine, but most excited to leverage his skills in free clinics, at home and abroad, to help his community upon graduation. Shaheen spends what little free time he has rock climbing, skiing, or snowboarding, hunting, or doing anything he can in the outdoors with his loyal shepherd Piper.

Cammy (Camtran) Huynh is a second-year student at Shenandoah University in Virginia. As a Student Representative for the school, she is currently serving on the Virginia Rural Health Association (VRHA) Board of Director. Through education and the establishment of collaborative partnerships, she helps the VRHA advocate for the improvement of the health of rural Virginians. Her passion to work for the underserved population skyrocketed after she witnessed the physician shortage dilemma in a Vietnam hospital. Since then, she has fundraised and made donations to the Kim Son clinic in Vietnam to provide free medicine and food to patients. She also attended a mission trip in rural Thailand where she helped deliver free health screenings to students in multiple villages.

Prior to PA school, Cammy took on many leadership roles. At George Mason University, she served as the President of a cultural sorority, Kappa Phi Lambda, in which she supervised all affairs of the Chapter. During her presidency, she planned and executed multiple women empowerment and community service events with her organization. She also served as the Events Operation Director for the Multi-Cultural Greek Council Executive Board in which she maintained communication with all Greek Organizations and assisted in community service event planning.

At Inova Hospital, she was a part of the Three-Hour Rule Improvement Team, Falls Prevention Committee, and served as a preceptor to train incoming clinical technicians. She also took the initiative to obtain her certification as a Brain Injury Specialist to enhance care for traumatic brain injury patients.

In her community, Cammy was awarded the title of Miss Vietfest United States by The National Organization for Vietnamese American Leadership of Greater Washington, DC (NOVAL-DC), which is a pageant that aims to empower women to take on leadership roles. During her year, Cammy attended a variety of community service events including providing free vaccinations to the underserved, tutoring underprivileged children, and providing food for the homeless.

Outside of school and work, Cammy enjoys writing and painting in her free time. One of her research papers was published on The Water Health Educator in 2014. Her artwork, which was sent to Africa as a gift for the children, was also published on the local Connection Newspaper in 2009. Her other hobbies include photography, working out, and traveling.

Check back soon for Catherine’s bio!

I am a 2nd year student at Towson/CCBC PA program and serve as class president. Last year our newly formed student society and I have worked on several projects and fundraiser for local organizations and plan more for our second year. After attending the AAPA conference in Denver this year, I was inspired to apply for a position on a student board committee.

Prior to PA school, I graduated from the University of Maryland Baltimore county (UMBC) with a bachelor’s in Emergency Health services, and have worked as a paramedic for the last 12 years. I received a master’s degree in Emergency Planning from Coventry University in England in 2010. I have volunteered several times with Remote Area Medical’s clinics, my local Civitan, and in 2015, I got to spend time at a refugee camp in Greece teaching first aid and helping where needed.

As a member of the service committee, I want to inspire students to maintain a foundation of service in their practice and I hope to learn new ways to give back to my community from my fellow committee members. In my free time I enjoy kayaking on the Chesapeake Bay.

Ken Lowry is a first-year PA student at the Yale PA Online Program and he lives in Salem, Oregon. He obtained a Bachelor of Science in biology from Biola University in California and is originally from Colorado. After undergrad, he worked as a scribe and then a tech for the Salem Hospital Emergency Department.

His goals are to help expand and improve workplace opportunities for PAs as well as broaden the public understanding of the role of a PA.

Lowry lives on a 100-acre farm with his wife and two great dogs, as well as too many horses. When not doing school work, he enjoys hiking, traveling, and wake surfing.

Michelle Karp is a second-year student at Lipscomb University in Nashville, TN where she serves as AAPA representative for their student society. Karp strives to be positive, help others, and advocate for the PA profession. Prior to PA school, she graduated with a Bachelor of Science from the University of Evansville where she studied Athletic Training. After graduation she worked as an Athletic Trainer at the collegiate level for 2 years working with football, softball, and soccer teams. In her free time she enjoys running, rock climbing, and spending time with family and friends.

Mike Gumpert is a first-year PA student at the Jefferson College of Health Sciences, where he also serves as the vice president of the student society. Gumpert graduated from the United States Naval Academy in 2009, where he earned a Bachelor of Science degree in English and entered the Navy as a nuclear submarine officer.  Over the next eight years his passion for helping others and empowering those around him in dynamic environments led him to the discovery of the PA profession.  Gumpert prepared for PA school by volunteering as an aid at an emergency room while he worked though his biological science prerequisites.

Gumpert’s goal for the mid-Atlantic region is to increase collaboration between programs and empower fellow PA students to get involved with the evolution of the PA profession. He is a firm believer that the best solutions can come from any experience level and strives to give his peers a voice.

Gumpert currently lives in Roanoke, Virginia, where, in his free time, he enjoys travel, hiking, camping, kayaking and reading.

Yue Jiang is a third year student at Baylor College of Medicine.

After graduating from Mount Holyoke College in Massachusetts with a BA in Psychology and Statistics, Yue started her research on complex sound perception at the University of Wisconsin in Madison, and later moved to Purdue University in Indiana to continue her studies. During graduate school, she volunteered at a local emergency center and a mental health crisis hotline, which ignited her passion for healthcare and motivated her to attend Washington University in Saint Louis to complete PA school prerequisites. While in Missouri, she continued her volunteering work in hospital and hospice care.

Yue was the Baylor representative at AAPA Assembly of Representatives from 2017-2018. She currently serves as the Baylor student liaison at Texas Gulf Coast PA Association, where she collaborate with PAs to launch pre-PA and PA student events. Outside of PA school, she continued seeking volunteering opportunities in disaster relief, medical support, and animal rescue in Houston area. She is determined to promote mental health, end-of-life care, and community service through her medical career and beyond. Besides medicine, she enjoys books, podcasts, singing in a choir, and walking dogs and petting cats at the humane society.